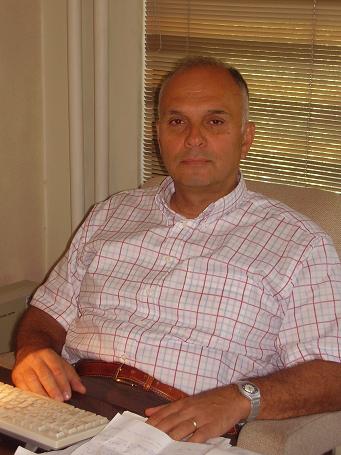 Gabriel Tsaligopoulos completed his secondary studies at the German School of Thessaloniki, where he was awarded the Abitur diploma. Following his graduation, he moved to Zurich, where he studied Industrial Engineering at the Federal Polytechnic of Zurich/ Switzerland (ΕΤΗ-Zürich).

Parallel to his main degree program, he showed special aptitude for learning foreign languages and applied himself to the systematic study English, French, Italian and Spanish, whilst improving his proficiency in German.

After his studies he completed his military service in the Greek Army as a Reserve Officer in the Technical Corps.

His translation career began formally in 1982, providing translation services with an emphasis on technical and scientific texts; a year later he founded his own translation agency, which he successfully runs to this day.

As part of his active involvement in the translation profession, Mr. Tsaligopoulos attends vocational seminars and conferences every year in order to stay informed and in continuous contact with the latest translation and interpretation advances and techniques.

He holds a number of advanced qualifications, including the Diploma in Advanced Translation Studies (with distinction) from the British Council and the Advanced German Language Diploma (Grosses Deutsches Sprachdiplom, grade „sehr gut“). Furthermore, after successfully passing examinations at the Chamber of Commerce and Industry of Düsseldorf, he is entitled to carry out official translations and interpretations for German authorities (staatlich anerkannter Übersetzer und Dolmetscher – IHK-Düsseldorf). He has also been awarded the Großes Deutsches Sprachdiplom of the Goethe Institute with honours.

He is married to Sophia Vassilikioti (PhD in Molecular Biology – University of Cambridge) and the father of 3 children.